Fragrance and Aromatherapy: It's far more than just the smell

The powerful influence of fragrant aromatic molecules on your health

When someone mentions “aromatherapy” to you, is your first thought of sitting back in softly-lit room or bubble bath, relaxing to the pleasing scent of a candle?  After all, aromatherapy is all about the fragrance.  Right?

Well, yes and no.

Fragrance is certainly an important part of aromatherapy.  Scent alone can trigger some rather emotional responses in people (hence, the frequent use of perfumes).  Scent can also trigger memory responses — both good and bad.  (I recall an episode of M∗A∗S∗H, where Hawkeye reacted to the smell of mold on some clothing.)  But, is this really aromatherapy?  If it is, then I could call my grandmother’s chocolate chip cookies aromatherapy.  They certainly smelled wonderful, and I always felt better eating them …

But, no; while fragrance itself can have profound effects on your overall health and sense of well-being, in many ways, it’s not so much the fragrance, per se, that has the effect; but rather, the combination of fragrant aromatic molecules, and the influence they exert — chemically — on the many systems of your body.  And, while chemists might be able to duplicate (or approximate fairly closely) the aroma of an essential oil, they can’t create an essential oil that has any value in aromatherapy, because they can’t duplicate — exactly, including the isomers — the chemistry that makes up that aroma. 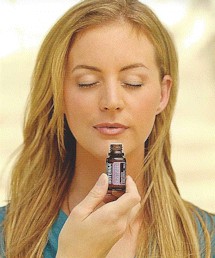 Smell is a physical thing

To simplify this a little, let’s look at it this way: A smell is not just a smell.  Whether it’s rotting vegetables, bad breath, body odor, or the delicate fragrance of a flower (or the oil extract of that flower), what you actually smell are volatile aromatic chemicals coming off it.  Smell is a physical — a chemical — thing.

With an essential oil’s fragrance, quality is everything

An essential oil can smell really good, yet have very few of the aromatic compounds necessary to provide you with any significant support for your health and wellness goals.  Although it might have a very pleasing scent, a cheaper oil will not have the depth or complexity of aroma of a good oil, indicating that it lacks the full compliment of aromatic compounds needed to produce the therapeutic benefits you’re looking for.

Remember: in aromatherapy, the fragrance of an essential oil is not just a smell; it’s the interplay of a complex chemical tapestry, with each part contributing important, synergistic action to the whole.  You need the complete harmonic effect, without missing parts or any element of discord.  And, you must always bear in mind that almost all of the oils produced in the world today (more than 98% of them) are produced for the cosmetic, perfume or food flavoring industries.  The requirements in these industries are very different than those of aromatherapy, and so, they can take short-cuts in the production of these oils, without any problems.  However, for aromatherapy, the standard is much higher; and, the oils must be produces in exacting ways to guarantee their therapeutic value.  Very, very few essential oils produced today can legitimately be called therapeutic-grade.

Why is this so important to you?

Research has shown that the actions of a fragrance (remember, it’s a chemical thing) on the sense of smell can exert powerful effects on the brain — especially on the hypothalamus (the hormone command center of your body) and limbic system (the seat of your emotions).

The fragrance of some essential oils high in sesquiterpenes, for example, such as myrrh, sandalwood, vetiver and frankincense, can increase oxygenation connectivity in the brain by as much as 28% (Nasel, 1992).  Such an increase in brain oxygen may lead to a heightened level of activity in the hypothalamus and limbic systems of the brain, which can have dramatic effects, not only on emotional balance, learning and mental attitude, but may also support the healthy function of many systems of the body.

It’s known that the direct inhalation of certain essential oils support healthy immune function, as well as helping to balance endocrine function.  Consequently, the fragrance of essential oils can directly affect many facets of your sense of health and well-being.

How an essential oil’s fragrance acts upon the brain

Tracing the path of an essential oil’s fragrance through the olfactory system is fascinating.

When a fragrance is inhaled, the odor molecules travel up the nose, and are trapped by olfactory membranes.  These membranes are very tiny, and well-protected by the lining inside the nose.  They contain about 800 million nerve endings, that receive the micro-fine, vaporized oil particles, carry them along the axon of the nerve fibers and connect them with the secondary neurons in the olfactory bulb in the brain.

Each odor molecule fits like a little puzzle piece into specific receptor-cell sites lining a membrane, known as the olfactory epithelium.  When stimulated by odor molecules, this lining of nerve cells triggers electrical impulses, which are then transported to the limbic system and olfactory sensory nerves at the base of the brain.  The olfactory bulb then transmits the impulses to

Because the limbic system is directly connected to those parts of the brain that control heart rate, blood pressure, breathing, memory, stress levels and hormone balance, the fragrance of an essential oil can have profound physiological and psychological effects.

The link between the sense of smell and emotions

The sense of smell is the only one of the five senses directly linked to the brain’s emotional control center, the limbic lobe.  All of your emotions and feelings emanate from this region.  The scent of a special fragrance can evoke memories and emotions before we’re even consciously aware of it.  (Where smells are concerned, we react first and think later.)  All other senses (touch, taste, hearing and sight) are routed through the thalamus, which acts as the switchboard for the brain, passing stimuli onto the cerebral cortex (the conscious thought center) and other part parts of the brain.

The limbic lobe (a group of brain structures that includes the hippocampus and amygdala, located below the cerebral cortex) can also directly activate the hypothalamus.  The hypothalamus is one of the most important parts of the brain, acting as our hormonal control center.  It releases chemical messengers that can affect everything from your sex drive to energy levels.  The production of growth hormones, sex hormones, thyroid hormones and neurotransmitters, like serotonin, are all governed by the hypothalamus.  Thus, the hypothalamus is often referred to as the master gland.

Essential oils — through their fragrance and unique molecular structure — can directly stimulate the limbic lobe and the hypothalamus, exerting profound effects on your mind and body.  Not only can inhalation of essential oils be used to lessen stress and emotional trauma, you can also use them to balance the endocrine system, through the hypothalamus.

In 1989, Dr. Joseph Ledoux (New York Medical University), discovered that the amygdala also plays a major role in storing and releasing emotional trauma.  He found that aromas have a profound effect in triggering a response from this gland.  Dr. Ledoux theorized that this could provide a major breakthrough in helping to trigger the release of pent-up emotional trauma.

The effects of fragrance beyond the brain

Olfactory nerves are like other nerves and organs of the body.  They respond to electrical signals and impulses that form coded messages, dispatched to the various body systems.  This may be why inhalation of some oils can have such profound effects on your overall sense of health and well-being.