A natural, whole food-based supplement made with a concentration of fucoxanthin and pomegranate seed oil to burn fat without the jitters

fücoTHIN®: Non-Stimulant Thermogenic is a natural, whole food-based supplement, made with a proprietary combination of a fucoxanthin concentrate and pomegranate seed oil, for a formula that is naturally thermogenic.  fücoTHIN® creates this thermogenic effect without stimulating the central nervous system.  No jitters.  No sleeplessness.  This isn’t just any fat-burning product.  It’s from Garden of Life®.

fücoTHIN® is a powerful whole food antioxidant complex.  Fucoxanthin, fücoTHIN‘s primary ingredient, is a carotenoid (similar to lutein and lycopene), a powerful antioxidant, that protects your cells from free-radical damage.

Fucoxanthin, contained in fücoTHIN®, is a proprietary concentrate form of a compound found in several different types of seaweed.  It is the pigment that gives brown seaweed its characteristic color, and also participates in photosynthesis (the conversion of light into energy).

The fucoxanthin included in the fücoTHIN® formula is derived from two specially cultivated strains of edible brown marine vegetables — Undaria (Wakame) and Laminaria (Kombu).  Traditionally known as seaweeds, these vegetables are considered some of the most nutritious vegetables on earth, and have been included in the diets of various Asian cultures since ancient times, most notably the Japanese.  Epidemiological studies strongly suggest that the high consumption of marine vegetables may be a contributing factor (among a great many others) in the well-established lower incidence of health problems in Japanese, as compared to American, populations.

fücoTHIN® has been studied by leading scientists for years, and is the only fucoxanthin formula that has human clinical research to confirm its thermogenic effect.

Why fat burning supplements are in demand:

It shouldn’t come as any great surprise that fat burners are in such high demand.

We don’t exercise enough.  We overeat.  We eat more of the foods that are horribly unhealthy, and we are getting fatter because of it. 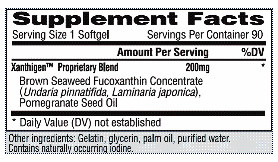 Why should you use fücoTHIN®, and not some other fat burner product on the market?

First of all, fücoTHIN® actually burns fat.  Most other products on the market today claim to burn fat, but their results tend to be very disappointing.  Worse still, many stimulate the central nervous system, causing negative side effects, including (but not limited to) jitters or sleeplessness.

In deciding to bring fücoTHIN® to market, Jordan Rubin, the founder of Garden of Life®, felt that most of the products on the market today were unsafe or ineffective.  In stark contrast to them, fücoTHIN® really works.  It burns fat; and clinical research shows that it does so without all of the harm that other fat burning formulas cause.

In America today, we have seen the proliferation of some unsafe and unhealthy products, designed to aid weight management and burn fat.  Unscrupulous companies tout the benefits of their “magic pills” that supposedly help you shed pounds without even trying.  But, of course, most of these products are completely ineffective (look for the “results not typical” disclosure in the ads).  Worse still, many of them contain chemicals that cause very dangerous side effects.  What is needed is a completely natural product that is clinically tested and shown to work.  What we need is fücoTHIN®.

In human trials, fücoTHIN® was clinically shown to significantly boost metabolism, which is supposed to help people lose weight.  It does this, at least in part, by supporting proper thyroid gland function.

Like many people today, my wife and I have had problems with low thyroid function.  We had been taking Armour thyroid® for years, with marginal benefits, until the FDA decided it has to protect us from this natural form of thyroid.

However, when my wife started using fücoTHIN®, she experienced significant weight loss.  It took about five weeks to show, but she was so excited about it, she made me start on it, as well.

My results haven’t meant weight loss, but I’ve found that fücoTHIN® seems to support my thyroid function — and my functionality — better than my prescription thyroid or any other supplement I’ve tried.  I’m really impressed.  So I told my (then) 82-year-old mom, who had struggled with low thyroid all of her life.

After my mom had been on fücoTHIN® for about a week, she reported that her body just “seemed to wake up”.  She intends to keep using it, even if she never loses any weight; and she hopes to get my dad on it, as well.

In human trials, fücoTHIN® was clinically shown to significantly boost metabolism.  This clinical research demonstrated that fücoTHIN® increased the subjects’ metabolic rate by an average of 18.2%, versus diet alone.  This helps to make diet and exercise more effective for weight control.

In two separate double-blind placebo controlled clinical trials, a total of 150 overweight female subjects were put on fücoTHIN®, the Garden of Life product that contains the patent-pending fucoxanthin formula developed by Dr. Ramazanov.  Participants followed an 1800-calorie diet, and were monitored over 16 weeks.

In the second clinical trial study, participants who used fücoTHIN® experienced a significantly higher metabolic rate than with diet alone, and without stimulating the central nervous system or experiencing any negative side effects.

Most fat-burning products work by creating a thermogenic effect in the body.  This is almost always done by stimulating the central nervous system.

Now, creating a thermogenic effect is good.  Thermogenesis is the process by which the body generates heat (energy), by increasing the metabolism above normal.  While thermogenesis is good, creating this effect by boosting the central nervous system can be very problematic for most people.

Fucoxanthin is unique, because it creates a thermogenic effect without stimulating the central nervous system.  It actually boosts your metabolism, without giving you the jitters or causing you to lose sleep.  Instead of the shotgun approach of boosting your metabolism by stimulating the central nervous system, fucoxanthin breaks down fat without the increased heart rate.

What are the benefits of pomegranate seed oil?

When should I expect to see results from fücoTHIN?

Clinical studies indicate an average of 6 weeks of use before significant thermogenic response is experienced; we suggest you give fücoTHIN® at least eight full weeks to begin to notice changes, and combine it with a calorie conscious diet and exercise.

Advanced Usage: Healthy Individuals may increase gradually to 3 softgels, 3 times daily (9 total) with food and at least 8 oz. of water.

To learn more about this amazing product, visit the fücoTHIN® website.

There are no reviews yet.